Staff and students from the School of Architecture and Built Environment featured when Melbourne Design Week expanded to Geelong for the first time earlier this year.

The Vital Signs: Smart city, living city exhibition was coordinated by the school in collaboration with the City of Greater Geelong, the Geelong Gallery and Geelong Regional Libraries.

It featured drawings, sketches and models from students of Deakin’s Urbanheart Surgery design studio, a range of visionary illustrations about Geelong in the year 2050 and 2100 composed by a team of five postgraduate architecture students, as well as a range of key projects developed within the University’s MInD Lab and the Live+Smart Research Lab.

‘It was absolutely fantastic to see members of the Geelong community engaging with the exhibits both at the Geelong Library and also the Geelong Gallery,’ Dr Yolanda Esteban from the School of Architecture and Built Environment says.

‘We believe it opened up some valuable discourse about the future of Geelong’s city centre and what it might look like in the future. It also gave audiences of all ages an opportunity to engage with new technologies like augmented reality.’ 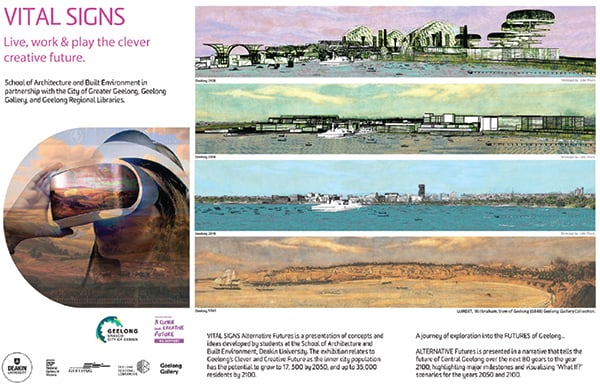 Dr Esteban was also a speaker at the Design Champions in the City of Design event where she discussed a soon-to-be-published book chapter, co-authored with colleague Dr John Rollo, on vision-making across the past 40 years in Central Geelong. Also speaking at the event was school colleague Associate Professor Mirjana Lozanovska, who discussed the design approach of the #VacantGeelong project.

Dr Phillip Roös, Director of the Live+Smart Research Lab, was one of a group of experts, including Deakin colleagues Dr Cameron Bishop and Dr Rea Dennis, involved in Nature, design and us. This one-day laboratory explored the importance of biophilia – the innate need of humans to connect to nature – and the role of biophilic design in our homes and cities, to support a healthy and liveable future.

‘The day was an absolute success, with more than 80 enthusiastic participants engaging in workshops,’ Dr Roös says.

‘The day concluded with a panel discussion, where participants requested the establishment of a new community group to promote Geelong as a Biophilic City.’

Other Design Week events involving the school were the Re-imagining Affordable Eco Housing workshop, a tour exploring Geelong’s green rooftops featuring designs and planting schemes by Deakin Master of Landscape Architecture students, and a presentation on the history, value and future of the Ovoid Sewer Aqueduct as explored through a final-year architectural design project by Marjan Oczkowicz.